WhatsApp Adds an Option for Muting Contacts or Groups Forever

by Eyetro
in Featured, News
0

WhatsApp lets you bring order in your account by muting groups and chats for eight hours, a week, or a year. But that’s not enough because we are stuck with some noisy groups forever.

Without an option to permanently mute a group or chat, WhatsApp currently allows us to give ourselves up to a one-year break from such noisy discussions.

In the latest update to its beta channel, WhatsApp can now mute contacts or groups permanently – forever. The new addition replaces the current option that lets you mute a chat for a year.

The update was spotted by now-mutual WhatsApp feature leaker WABetaInfo in the WhatsApp beta for Android version 2.20.201.10 submitted on Google Play Store. But it seems you don’t necessarily need the latest version. Android Authority reports they’ve seen the option in the previous iteration, version 2.20.201.9. This means WhatsApp could have also triggered the update from the server-side.

The latest update also brings a new Storage Usage UI and accompanying tools that were not available to many in the previous version of the app.

The new storage management menu gives you a more detailed view of what’s consuming most of your internal storage space. You can now note the large files are eating your storage space from a dedicated section and also files that you’ve forwarded in the past. 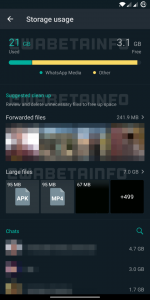 Media Guideline is also a new feature in the update whose primary function to let users align stickers and text when editing media files inside the app.

Voice and Video Call buttons inside chats with verified business accounts have also been hidden.

The new features are only available on Android for now. To check which version of WhatsApp you’re using, go to Settings > Help > App info.

Eyetro Digital is a private and independently run entity providing tech news within Zimbabwe and the world at large. The blog specializes in covering business and Information Technology news, guidelines and professional assessment, views, and reviews of products and services. Our pursuit is to serve the local market with tech news and hold the largest online community discussing tech issues affecting the world

Cassava’s Revenue Scales up 68% as Diversification Strategy Pays Off

Experience Chatting and Interacting with Yourself on WhatsApp

Clean-Cut Comparison of Google Play Nearby Sharing & Near- Field Communication

Experience Chatting and Interacting with Yourself on WhatsApp

Clean-Cut Comparison of Google Play Nearby Sharing & Near- Field Communication

No Result
View All Result